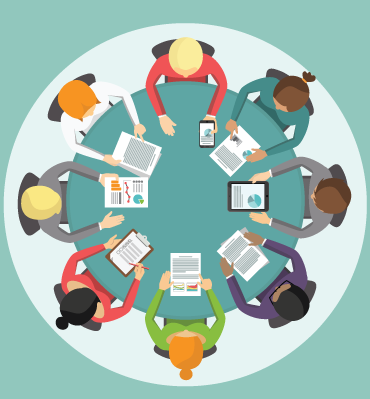 An interview with Steve and Beth Greeley
Andee Wilcott

Recently I had the pleasure of sitting down (virtually) with our clients Steve Greeley, President, and Beth Greeley, Associate, from Shared Cause, a Framingham-based consulting firm whose focus is on partnering with communities, institutions, coalitions, foundations and governments to enact social progress. Our talk spanned a wide range of topics – from how their partnership approach works, to the challenges and opportunities with remote learning, to their decision to rebrand their firm after nearly 28 years. There was too much great stuff to fit into a single blog post, so below is Part 1 of our interview, plus a video highlight from that discussion. I hope you enjoy it!

Andee: Tell me a little bit about what Shared Cause is and how you fit into the whole ecosphere of public engagement and municipal development?

Steve: So we’re 28 years old as an organization that started out as DCA and what we do is we focus on creating the partnerships, the plans, and organizing the resources to solve complex social problems. Most times those are local, sometimes they’re statewide efforts that we’re involved in, sometimes they’re national and even global initiatives. We focus on public health and healthcare issues. We also focus a lot on education and workforce issues because the process we use actually can be effective no matter what the issue.

Andee: Talk to me about your approach and how it's different from that of other consultants

“You know, everyone talks about “we gotta break out of these silos” but not many people know how to do it. And I think that’s something we’ve always done, even before that nomenclature came into being. It’s what we did. We build coalitions going across silos.”

Steve: Typically I think consulting tends to focus on one specific area of expertise and tries to go deep on that area of expertise. That's great, but most complex social problems require solutions that also are complex, and often times have many different dimensions to them. You have to be able to figure out how to bring those dimensions to bear. And that means you have to be able to understand what the resources are to take on an issue, what the strategies are that could be employed. You have to understand what the motivations would be for people to work together, and help them determine how to work together. And the other thing--the big thing--the way money flows in our society, in most societies, is that it goes to programs and services and individual organizations and not to partnerships. So funding tends to lock in place doing things is silos.

We need to bring people and organizations together, figure out how to harness the resources that they already have and to put them to better use, and also how to advocate together to bring additional resources to bear where they’re needed in a more strategic way. We wanted a process as we get an understanding of almost like the ecosystem surrounding an issue. Taking a look at all those dimensions I describe and then try to make sense of it--getting the people involved that have helped us understand it, play our understanding off of them. And once we reach agreement of “yeah, that’s it”. Then we start planning together.

Beth: And then the idea of silos I think is a thing that strikes me the most. You know, everyone talks about “we gotta break out of these silos” but not many people know how to do it. And I think that’s something we’ve always done, even before that nomenclature came into being. It’s what we did. We build coalitions going across silos. This is a smaller note, but in my experience in different parts of my career, consultants come in typically and they study and they have expertise. They share that and they provide a product that can be very useful. But then they go on. They hand you the report, have a presentation, and go on. And we tend to come in to get things organized, make sure it’s organized, and then get them going. In some cases we stay along for part of the ride to fine tune or add on or adjust. So I think that’s what’s different about our approach. We don’t give a deliverable and then off we go.

Andee: In taking a partnership approach instead of a more traditional consultant approach, what do you feel the overall benefit is and how do you create better outcomes?

Beth: Overall, when you stick with it, you’re really invested. You’re still there and you have to make this happen. You haven’t bounced on to the next assignment and I think we do feel like real partners. We are very invested in making sure our efforts get going.

“One of the big lessons I've learned over the years is the biggest thing that makes change happen is new working relationships among the people who are capable of making change.”

Steve: And I’ll add that one of the big lessons I've learned over the years is the biggest thing that makes change happen is new working relationships among the people who are capable of making change.

It takes a while for new types of relationships actually to take hold and become just the way things were. Oftentimes it’s helpful to have us in partnership to help identify what might be getting in the way of that relationship building. Or just how you nurture it along, which is more likely to be the case because it hasn’t been the way people have worked together. So that winds up being one of the most satisfying things because long after we have done something, we still have those relationships with all these different people. That’s just very satisfying, to help people accomplish something that they always wanted to accomplish, or maybe they didn’t even know they could accomplish, and you’re their partner and it happens. It becomes a new way of working. People in the work that we do are very mission oriented. They want to make change happen. And so helping them achieve their sense of purpose is a really big deal.

Andee: Do you feel that over time, as you've done this work, has anything changed at either the local or national level that has made your job harder or easier?

Steve: Yeah I would say very much so on both counts. For a long time I used to like to say that our biggest challenge was that nobody wakes up in the morning and says “I need to cause developer”.  And that’s what we do. So it was basically educating people on there could be a new way of working. Then about 10 years ago there was an article in the Stanford social science publication - I forgot the formal name of it…

Beth: SSIR, but I forget what it all means.

“For a long time I used to like to say that our biggest challenge was that nobody wakes up in the morning and says 'I need a cause developer'...the challenge [now] has been we’re a little tiny organization that was pioneering this work and now there’s some big players with huge funding that are taking ownership of this space."

Steve: Right -- Social Science Research or something. But it was a very good article about this “new idea” called Collective Impact. And some folks at another organization had studied this kind of phenomenon that we were involved with, had attached some principals to it and had written eloquently about it. They did a great service. They did such a good job of describing at least parts of the work that it had this huge impact. Everywhere we go around the country now we have people talking about Collective Impact. They think they know what it is. Oftentimes they have different takes on it which is not surprising. It’s had a huge influence. That has overall been really great because now we're not having to teach people the fundamental concept. Funders, nonprofits, all sorts of people involved in social change get this thing. The challenge has been we’re a little tiny organization that was pioneering this work and now there’s some big players with huge funding that are taking ownership of this space.

Just simply--number one for marketing perspective--that was a challenge. And it was also a challenge because the big organizations weren’t approaching the work in the way that we do. It was frustrating to see. They were acting like teachers and conveners, but they weren’t acting like true partners. You can teach people this process, and that’s good, but unless you’re doing this in-depth work, the stuff we’re talking about makes it harder to make happen. Relationship-building is made harder to make happen. I’d say on the whole, it’s been a great thing because the country is changing under the radar. This kind of collaboration is now happening all over the place. You never read about it. You never hear about it on the news. And yet it’s changing the way society works. We’re proud to have had some kind of role in that and we’re glad that we’re a part of it.

Andee: I think that’s an important point to make. You see the kind of work you’ve been advocating for and that you’ve been doing for over 28 years everywhere now. And sure that comes with its own set of challenges, but do you feel that organizations are just more ready to listen when you approach them?

Steve: Now because people are thinking in a way that’s generally similar to what we're all about-- and that a lot of people are thinking that way--that means they have something in common with one another. That also means that when we bring people together, we are at a different starting point. There’s an excitement associated with this. We hear on so many assignments, whether it's a local or huge statewide assignment, is “this is the first time we've gotten together like this,” “this is the first time I've been in a room full of people like this.” Just the fact people are coming together already having been heard by the people that are standing in front of them, and they're discovering what they have in common, creates this new sense of possibility. So much of what happens along the way has to do with how solid your foundation is up front. And so when we hear that excitement, and it’s the excitement of having been heard and understood and know that others feel the same way that you do, and they bring other things to the table that you don’t. What you have has a role. That builds a foundation.

Beth: And sometimes there’s enough of a certain kind of player in the room, and there might be kind of a recalcitrant group, and they come around because they see what it possible. They see how much everyone else has said about “this isn’t about us, this is about everybody doing this together” and they gradually, you know you can almost see it. A big project that we helped design, that’s going strong 10 years later, it’s huge now. But in the early days the public schools were involved and they had a view of how things go, but all these other players were coming together and saying “let’s reimagine this and lets see where we can really take this” and really revolutionize what they’d been doing every summer. And they came around. It was truly a collaborative effort with a real team. It got done in 9 months. You never turn a big ship of bureaucracy around that fast, but they did it. That one always stands out to me because some weren’t convinced, but they envisioned what could happen.