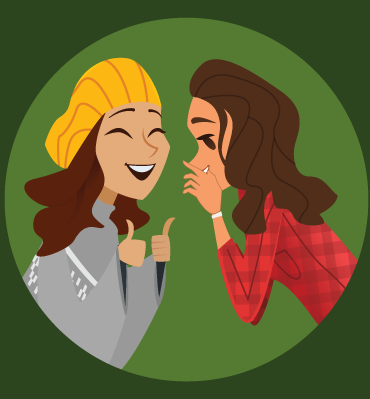 Persuasion is the lifeblood of commerce. How can we employ it for good?
Andee Wilcott

I’ve been stuck on the idea of persuasion lately. How do you motivate people to act in a way you want them to? We see persuasion campaigns everywhere – in politics, in business, even in relationships. At its core, a persuasion campaign appeals to a person’s emotions. Once they are emotionally invested, they are more likely to agree to, buy, or do what the persuader wants.

What Happened with GameStop?

I’ve been fascinated by the recent Reddit-fueled stock market rally of GameStop. A group of people on Reddit discovered that hedge funds were taking a strong short position on GameStop. In an effort to thwart the hedge funds from making money on that trade, a small group of Redditors convinced hundreds of retail investors to buy GameStop stock, causing the price to skyrocket and “short-squeezing” the hedge funds. The hedge funds that shorted lost billions, and at least one is so far in the hole that it has filed for bankruptcy.

How did a small anonymous group posting on Reddit persuade all of these people to use their own money to buy stock in a company that was financially struggling? By appealing to their emotions. After over a year of hardship worldwide caused by a global pandemic, “make the greedy rich hedge fund managers pay” is a very compelling argument. Add in how easy it is for regular people to trade individual stocks online and you create the conditions where a little bit of persuasion has a big impact.

How do you qualify a successful persuasion campaign as good or bad?

An analytical look at persuasion campaigns misses whether they are good or bad. To some, the Redditors’ call to action was akin to a modern day David & Goliath, where regular people stood up to an exclusive club of greedy rich assholes. To others, it’s another attack on reality itself. GameStop, by all accounts, is a failing company. Though private equity and hedge funds had a lot to do with their demise, that fact still remains.

While I don’t shed a tear for hedge funds losing money at a game they’ve played for years, I’m not convinced the GameStop gambit was on the whole a good thing. It remains to be seen what the fallout from this campaign will be. My hope is that the small investors who jumped on the bandwagon are able to cover their bets.

I think the proper metric to measuring the goodness or evilness of a persuasion campaign is to see who benefits, who loses and why. If it’s good for the planet, good for humanity, or good for the marginalized, then it’s good in my view. If people or the planet are harmed by said campaign, then I would consider it evil. Of course, this metric is entirely subjective. But when you’re dealing with belief, emotion and persuasion, subjectivity is all you have.

Most of us in marketing work for or with companies that we believe create products and services that help people. So how do we organize persuasive campaigns that are also good?

Tell the truth. Objective truth is a rarity these days, but it’s surprisingly easy to do. Be truthful in what your product or service does. Consistently telling the truth will foster trust with your audience.

Be clear. Clear messaging is key to any marketing strategy. Avoid jargon, slogans, or overly-complicated descriptions. If you’re selling a product, use a picture of the product. Don’t leave your audience wondering what they just read or looked at.

Express the Why: What are your intentions? Good intentions help people understand your point of view and bring them to your side. A good example is the company 4Ocean. Their strategy relies heavily on the reasons they formed the company and using that narrative to foster their brand.

Avoid superlatives. Don’t use words like best, most, fastest, biggest, etc. in your messaging. People are not persuaded by them because they know it’s probably not true. Only Buddy the Elf would fall for such a claim.

Have a clear ask. In addition to having a clear message, you need a singular, simple call to action. What do you want your audience to do? Click on something, go somewhere, pick up the phone? Make sure what you are asking of them is a logical request for the message you are giving them.

Following these guidelines will not only help you avoid some common marketing mistakes, it will keep you on the path of creating campaigns that persuade the audience to your point of view for all the right reasons.