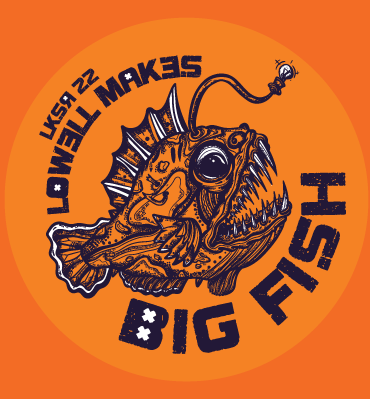 It took all summer, but we did it. We built a sculpture for the Lowell Kinetic Sculpture Race! In this race, people powered sculptures rolled down a 5-mile road course, navigated a giant mud pit, and powered down a stretch of the Merrimac River—all while minions hype up and bribe the crowd (and officials) with sculpture themed tchotchkes! The fifth annual race was the first running of the race since 2019. It was our first race too.

After a lot of brainstorming in late May, we settled on a reverse-tricycle design that would carry two people. The inspiration for our sculpture would be the angler fish from Finding Nemo. I nicknamed the sculpture, “Big Fish.” 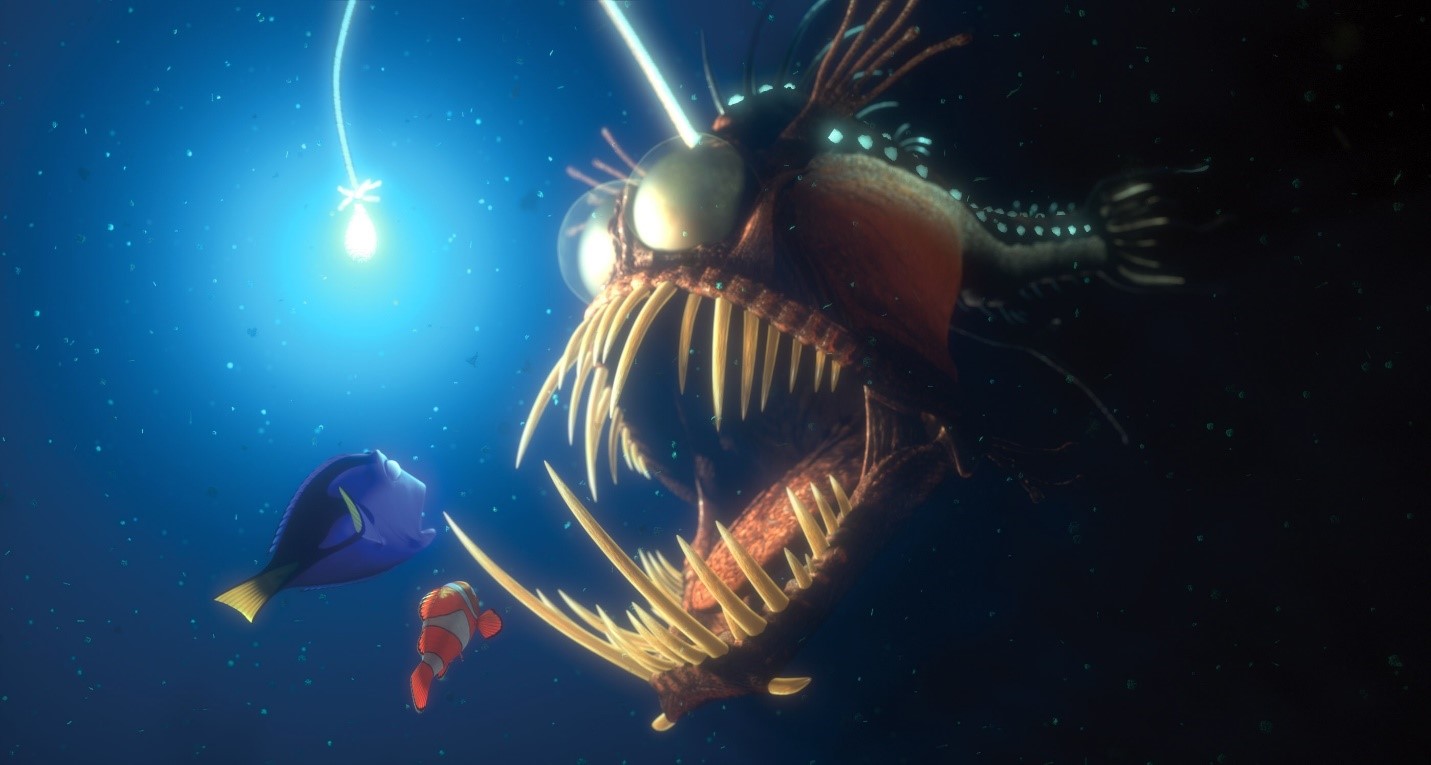 We spent most of June working out the structural design virtually using Fusion 360. We wanted to use PVC for the main body of the sculpture. Using PVC allowed us to get to testing and experimentation faster and did not require welding (yet). Since it had to carry two people plus all the parts that made it a road vehicle, we settled on truss-based space frame. This would hopefully distribute all the weight enough to avoid high pressure points. Essentially it would be a raft with sealed 55-gallon plastic barrels as pontoons. 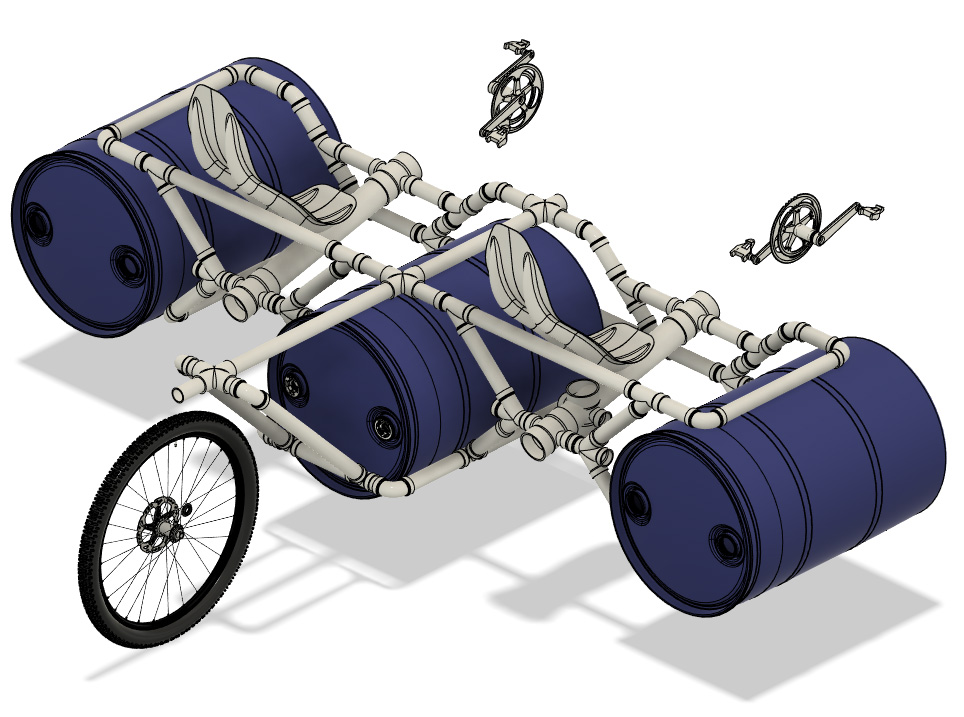 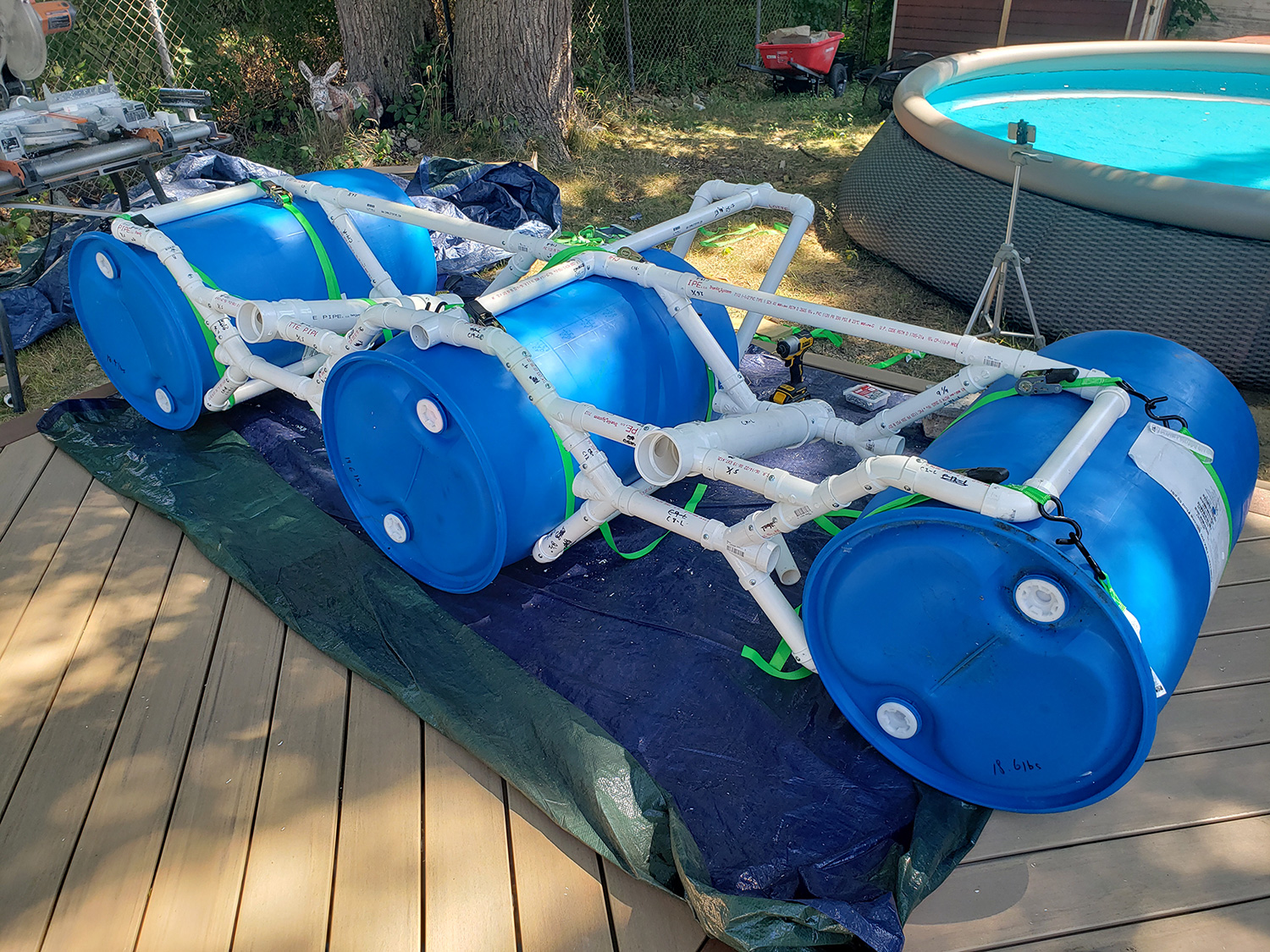 The raft proved to be unstable during our first water test (see video). The center pontoon had to be moved back in order to create a stable tripod in the water. We work through the changes virtually before modifying the IRL raft. Our second water test was successful. But then we discovered a potential catastrophe.

In order to move the center barrel rearward enough, we had to widen the structure. When we strapped the barrels onto the frame, we discovered that the sculpture was too wide! Too wide?!? LKSR rules state that sculptures cannot be wider than 102 inches. If we didn’t fix this, we would’ve been out before we started.

We worked feverishly to rework the spacing and structure virtually. The center barrel moved much further back. We added new PVC framing to support the new location and consolidated the geometry of the cross-supports to reduce the overall width by 14 inches! Now we just needed to rebuild the new structure in a few days to stay on track… 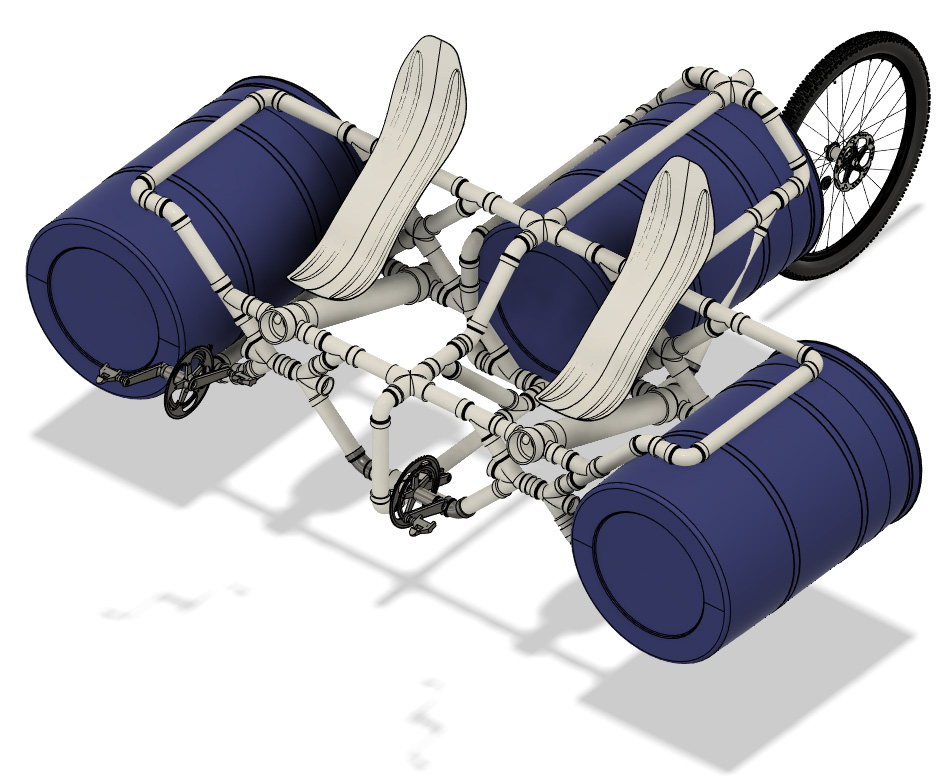 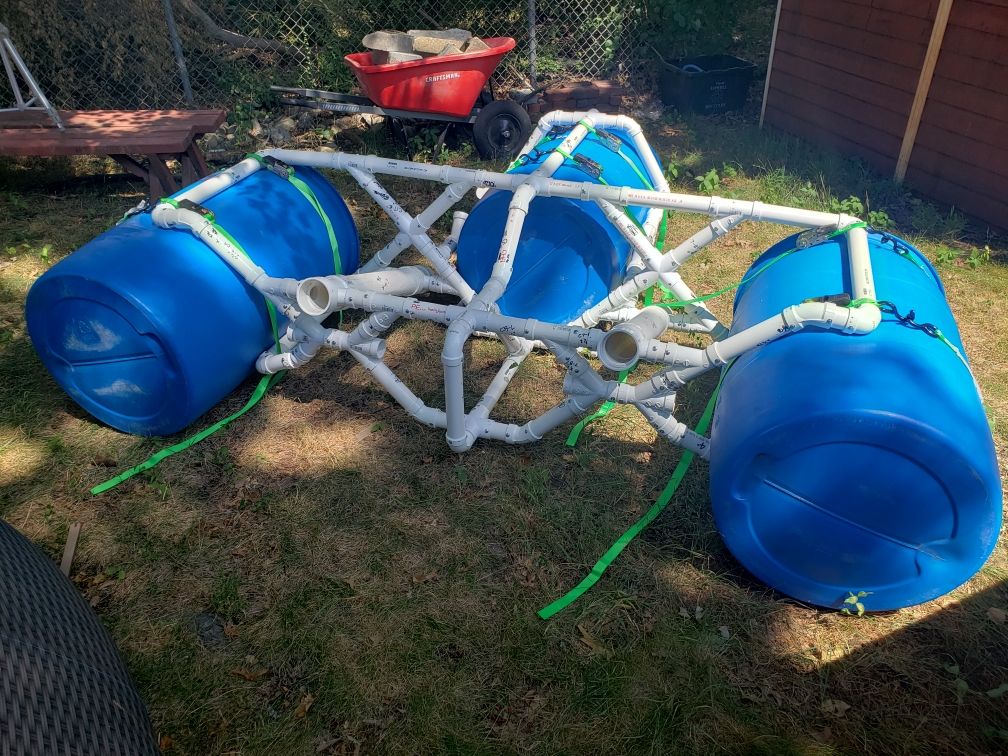 It took all of July and some of August, but the raft was ready. We spent the rest of August figuring out how to attach bicycle frames to it so we could ride it down the street. We intercepted many bike frames that The Bike Connector could not save and would have been scrapped. We couldn’t accurately design this virtually because of the variation in raw materials, but we were also running short on time.

With the general idea in mind, we began by cutting the rear suspensions out from two aluminum mountain bike frames. These would hold the front wheels. We wanted two wheels, a big and a small wheel, under each pilot to spread out the weight load. This configuration would also let us wrap a tire tread around each pair wheels to create tank treads. We hoped this would give us extra traction on the mud obstacle. We cut rear forks out from two other bikes and constructed adjustable supports to hold the smaller wheels. Then we bolted all of it to the PVC frame. 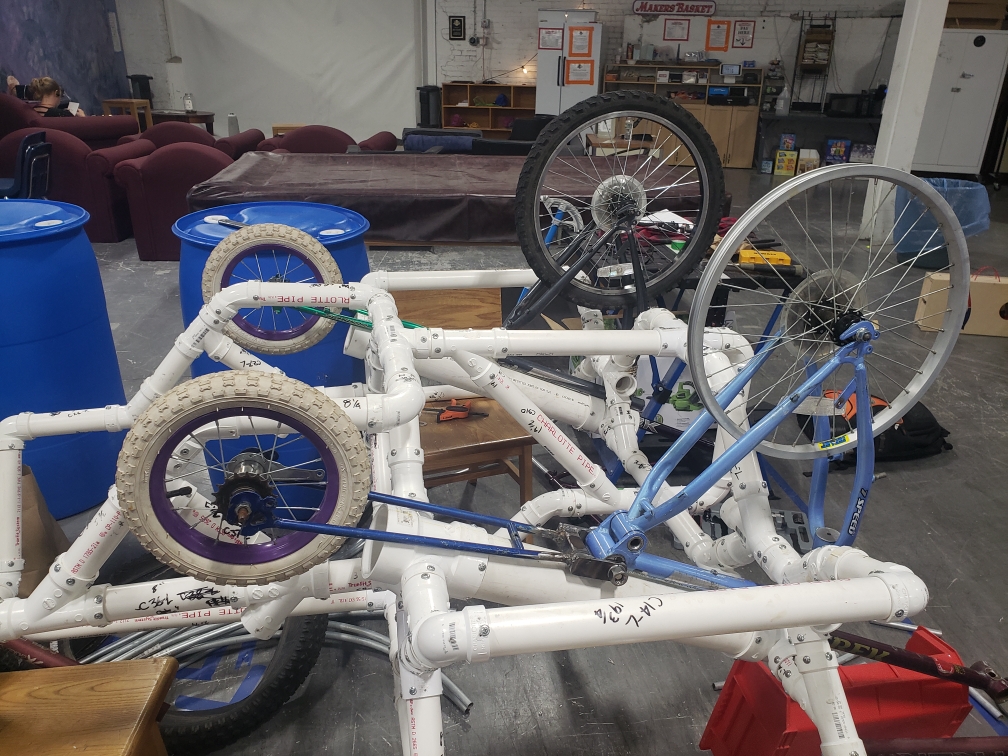 The frames were very strong in one direction but very weak in the other. We used turnbuckles to prevent the frames from buckling sideways. We attached eye bolts to the PVC. We were able to find a spot on the bike frames to attach the other side to, but this would come back to haunt us during the race.

Next, we modified and joined the frames of 4 more bikes to create the supports for the sculpture’s chain-driven propulsion. During testing, one of the chains got stuck and we bent one of the drive's supports with surprisingly little effort. Physics is real! We realized a bit too late that the pedal shaft needed more bracing. However, since the pedals on the bent tube were now at the optimal distance for one of the pilots, we left it in place and reinforced it. Then we only had to extend the pedals on the other side (which were also too short).

We made two chairs welded from electrical conduit and upholstered them with waterproof fabric (thanks, Andee!). We then cut the front out of another bike frame to create the steerable rear axle. 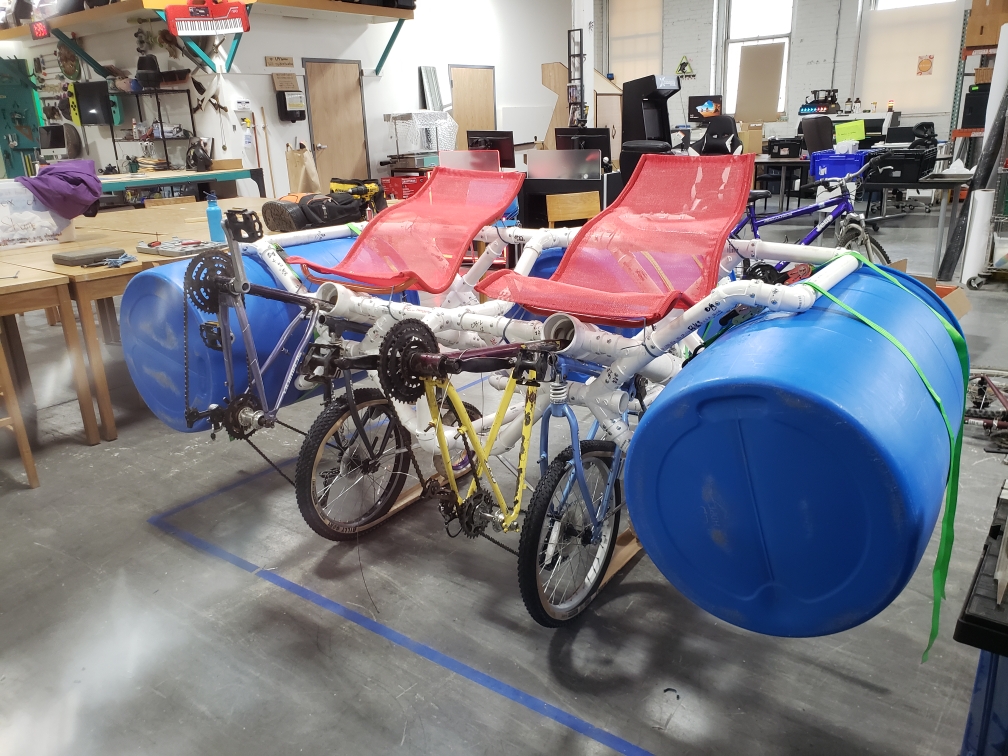 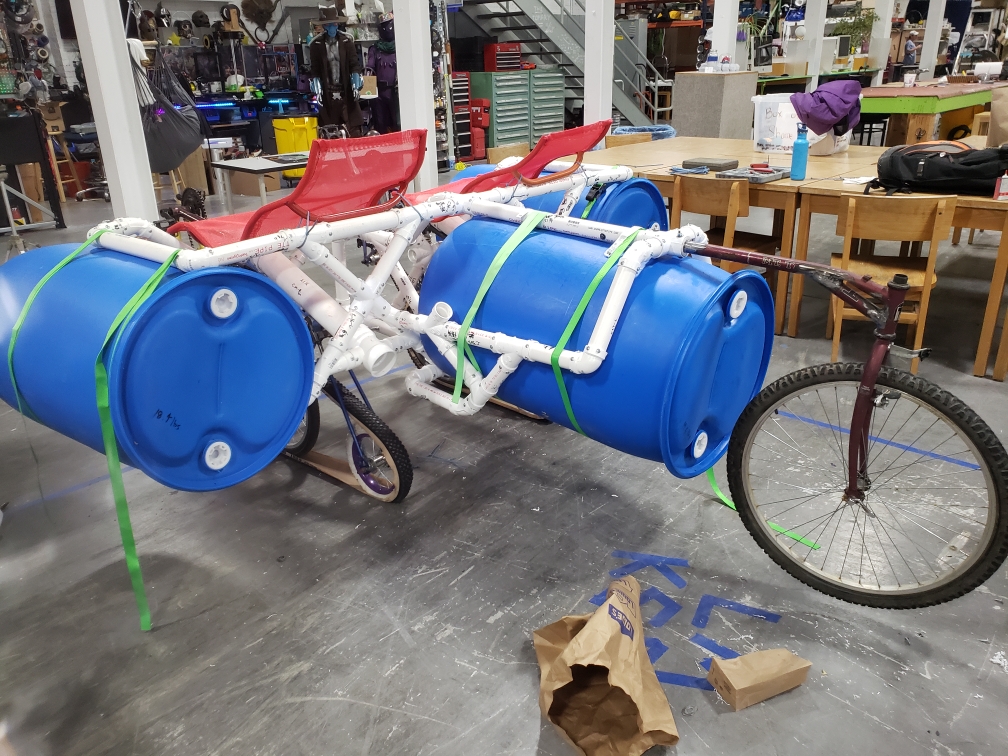 By September, we were ready for our first pedal test, or so we thought. As soon as we tried the pedals, one of the chains got stuck behind the turnbuckle. We didn’t notice until I had bent the frame supporting one of the cranks. Physics teaches us that a lever arm’s force increase with the length of the arm. I bent steel without even trying.

We were able to add some more bracing to prevent bending the frame by pedaling the cranks. A few days later we tried again. This time, we twisted the rear frame instead of bending it, but it was the same physics lesson.

Though engineering itself is an art, we still had more art to engineer. Big Fish had to look the part and we only had a few days left. We built a fish canopy frame using electrical conduit, zip ties, and duct tape. While the canopy was being covered with a skin of glittery fabric, we added 40 pounds of steel structure to the PVC frame that was needed to stabilize the rear wheel. We finalized our brakes and steering. We added eyes and teeth to the canopy. We finally came up with a water propulsion solution. We made team t-shirts. It was a mad dash to the end! 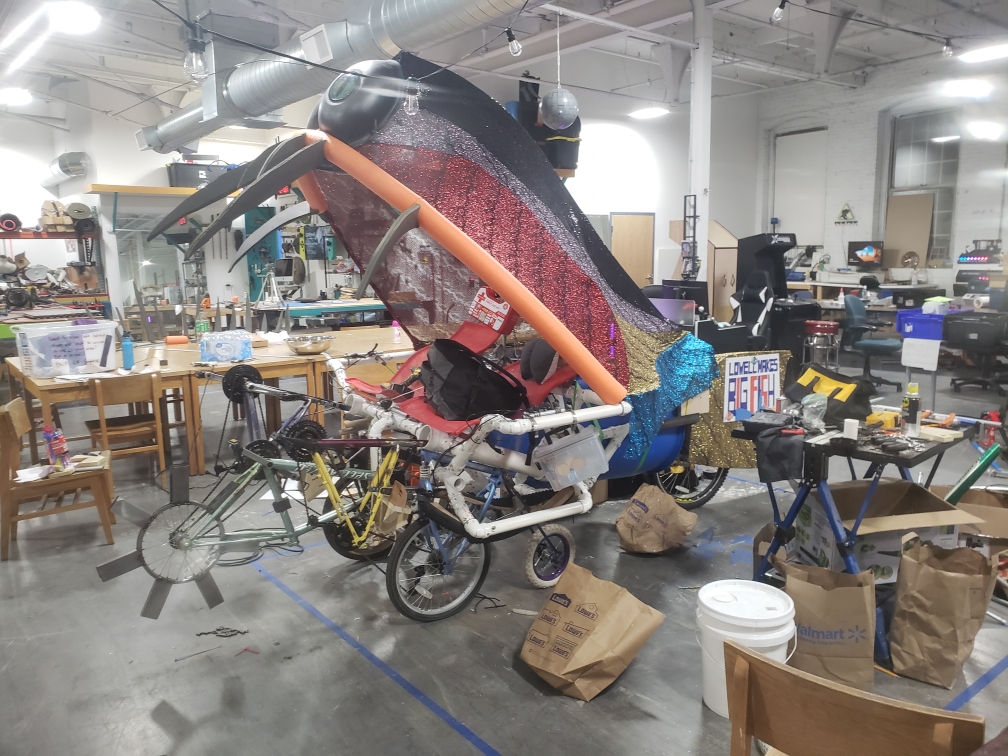 It was a glorious day. The sun was out. It was warm and a perfect day to pedal a 600lb beast through scenic Lowell. Instead of towing Big Fish, we decided to walk the sculpture down to the start line. We arrived just in time. The product of over 3 months of work was finally ready to race!

We started well, rumbling across Bone Crusher Alley intact. Our minions swarmed around us, simultaneously hyping up Big Fish and making sure we didn’t crash into anyone. 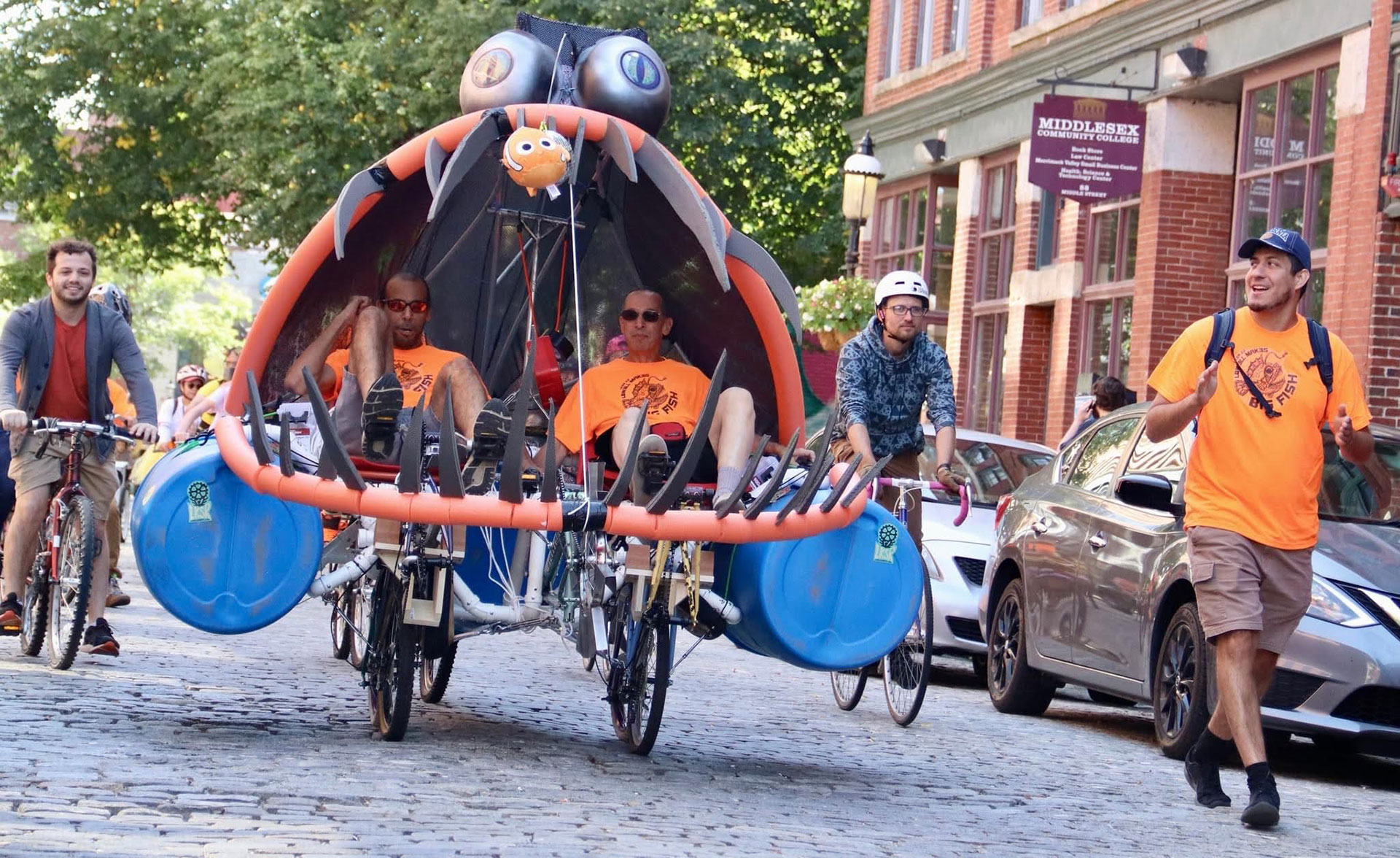 We turned left and started our trek toward the Maddening Mud Pit. On the way, we had our first mishap. One of the links on one of the chains sheered off, breaking the chain. Luckily, we had a bike kit with a chain tool and went about fixing it. We climbed under Big Fish like auto mechanics under a car and got to work. It took much longer than we wanted but we were eventually able to fix the chain and get moving again! I’m not sure, but I think this is when our amazing minions got the crowds to start chanting our name, “Big Fish! Big Fish!” Glorious. 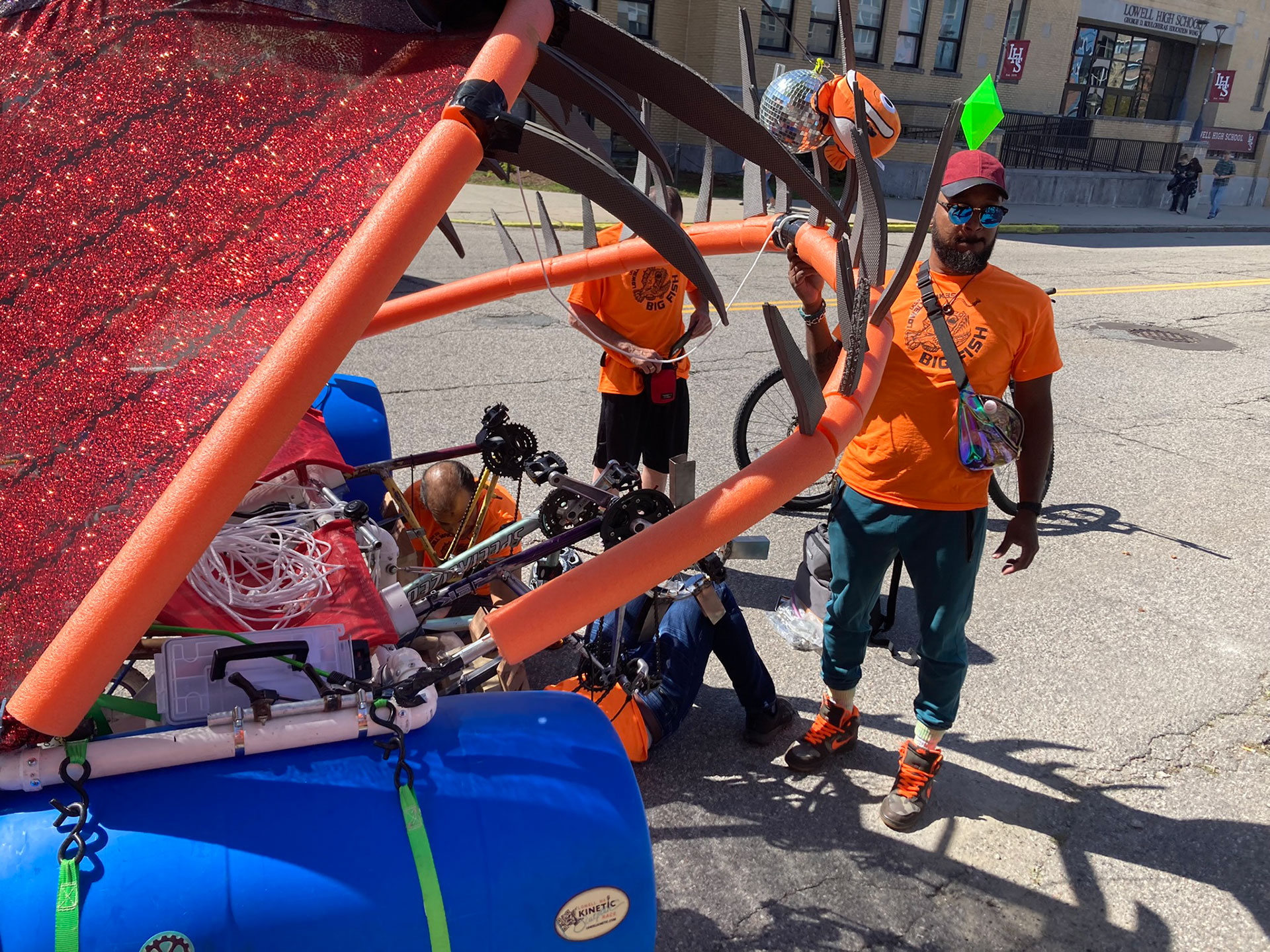 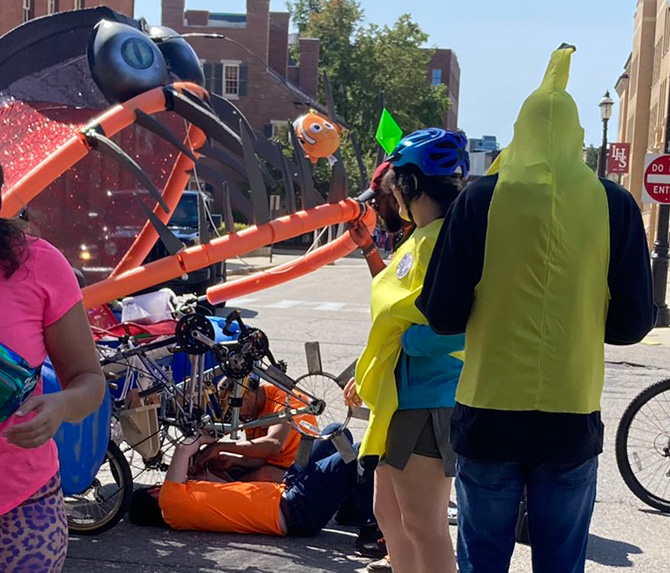 Once we were back on the road and headed toward the mud pit, we found out that we took too long to get to there and could not attempt the obstacle. It was disappointing, but at least we were still in the race! We waited for everyone to leave the mud pit before restarting our quest.

We trekked through the hills north of downtown. This is where we really noticed the weight of our sculpture. Our legs burned. We had to stop again when one of the chains slipped off the largest sprocket on the freewheel. After it happened a second time, we decided to avoid that gear altogether. That cost us a lot of power. We really felt that loss on the up-hills. It took a while, but we finally made it to the water obstacle. 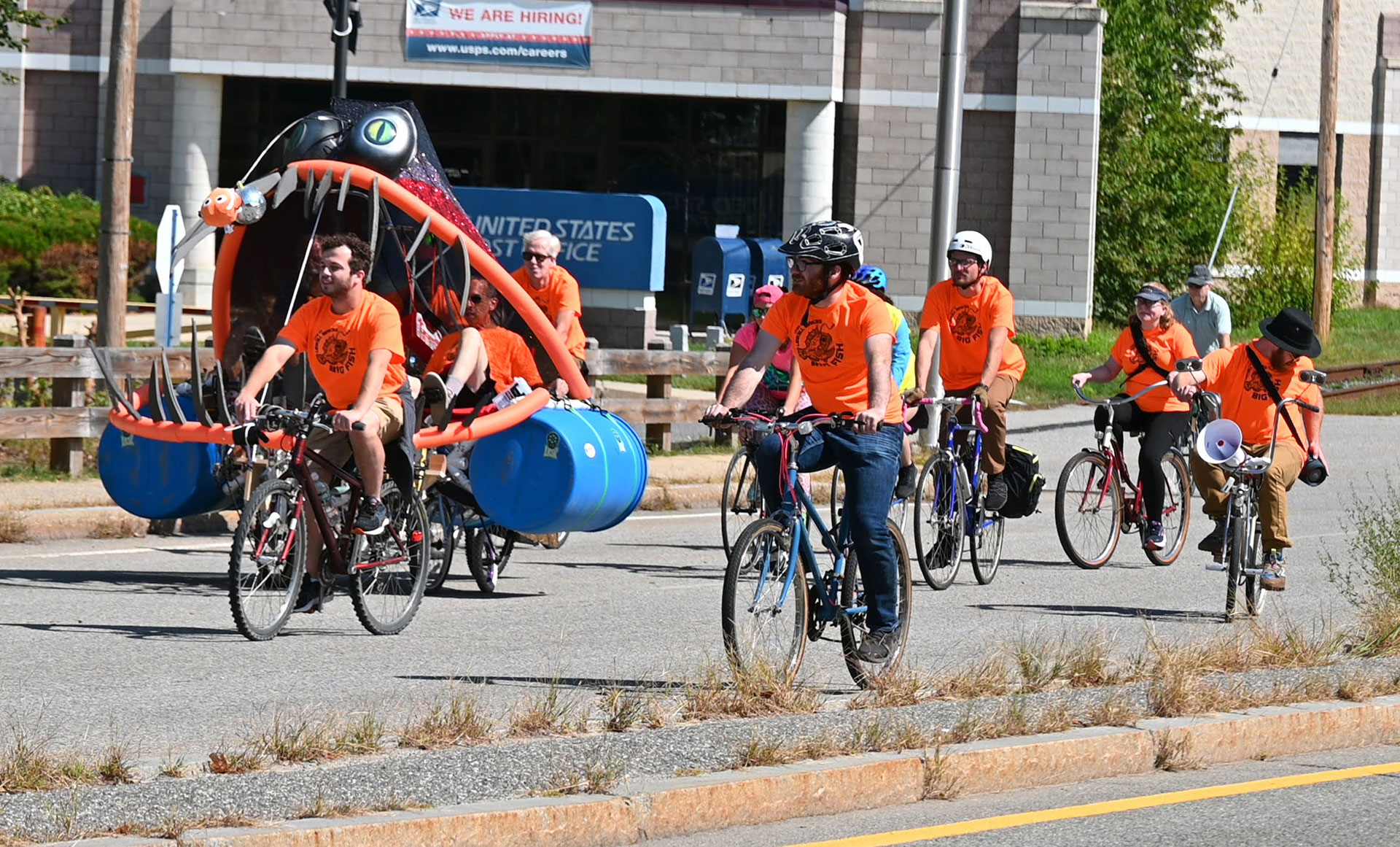 We got a break from pedaling when we got to the park. But we didn’t have enough time to set up the tank treads for the water. We should have, because our wheels were too far below the water barrels that we used for flotation.

We sat like a beached whale on the edge of the river’s put-in. One of our dedicated minions trudged into the mud and pushed us the rest of the way onto the river. Floating was the only thing we were sure Big Fish would do. But our late additions changed our orientation in the water and our water wheel sank too far into the water. We used the backup oars to row ourselves slowly down river. 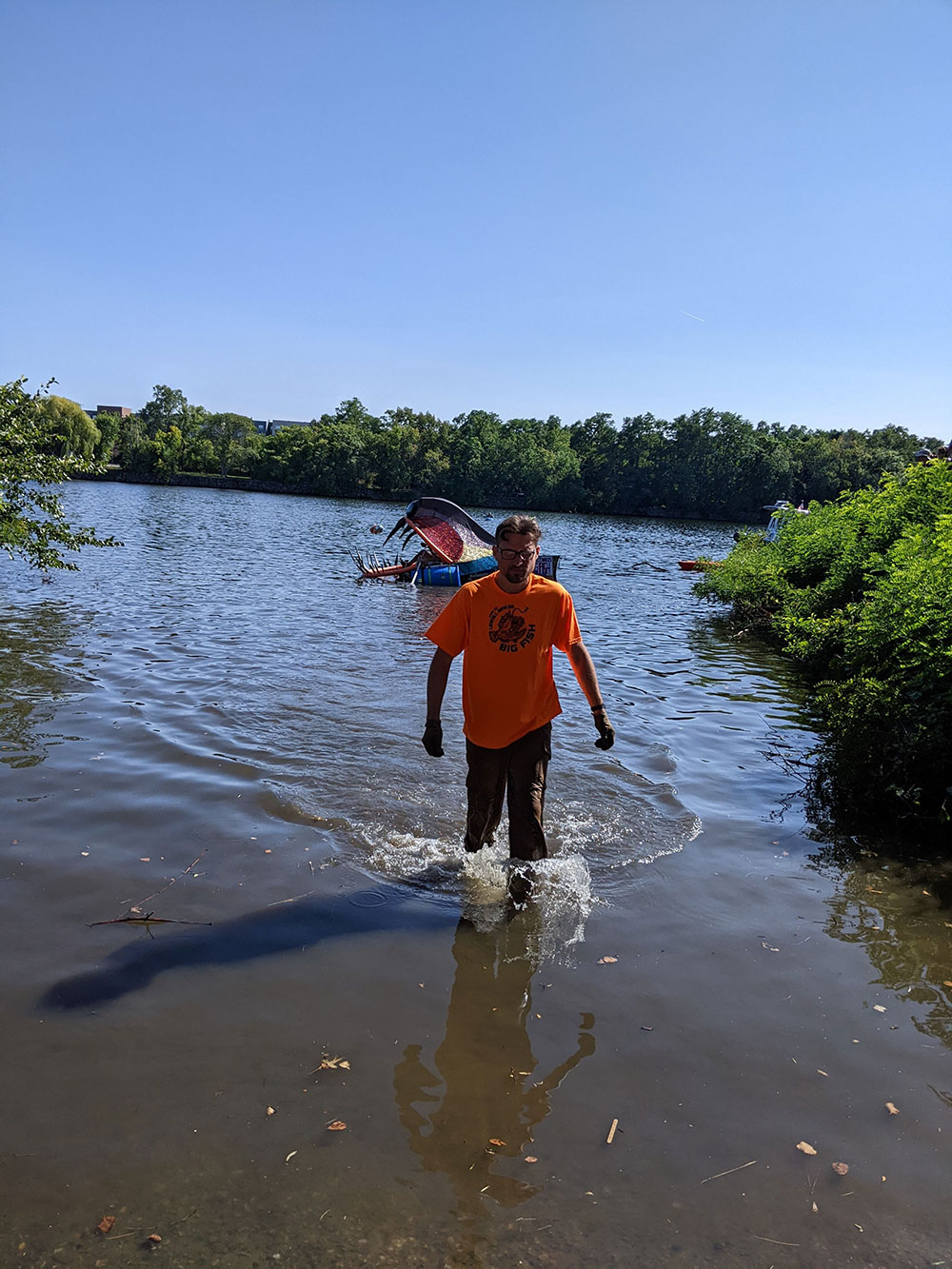 And a lot of pull! 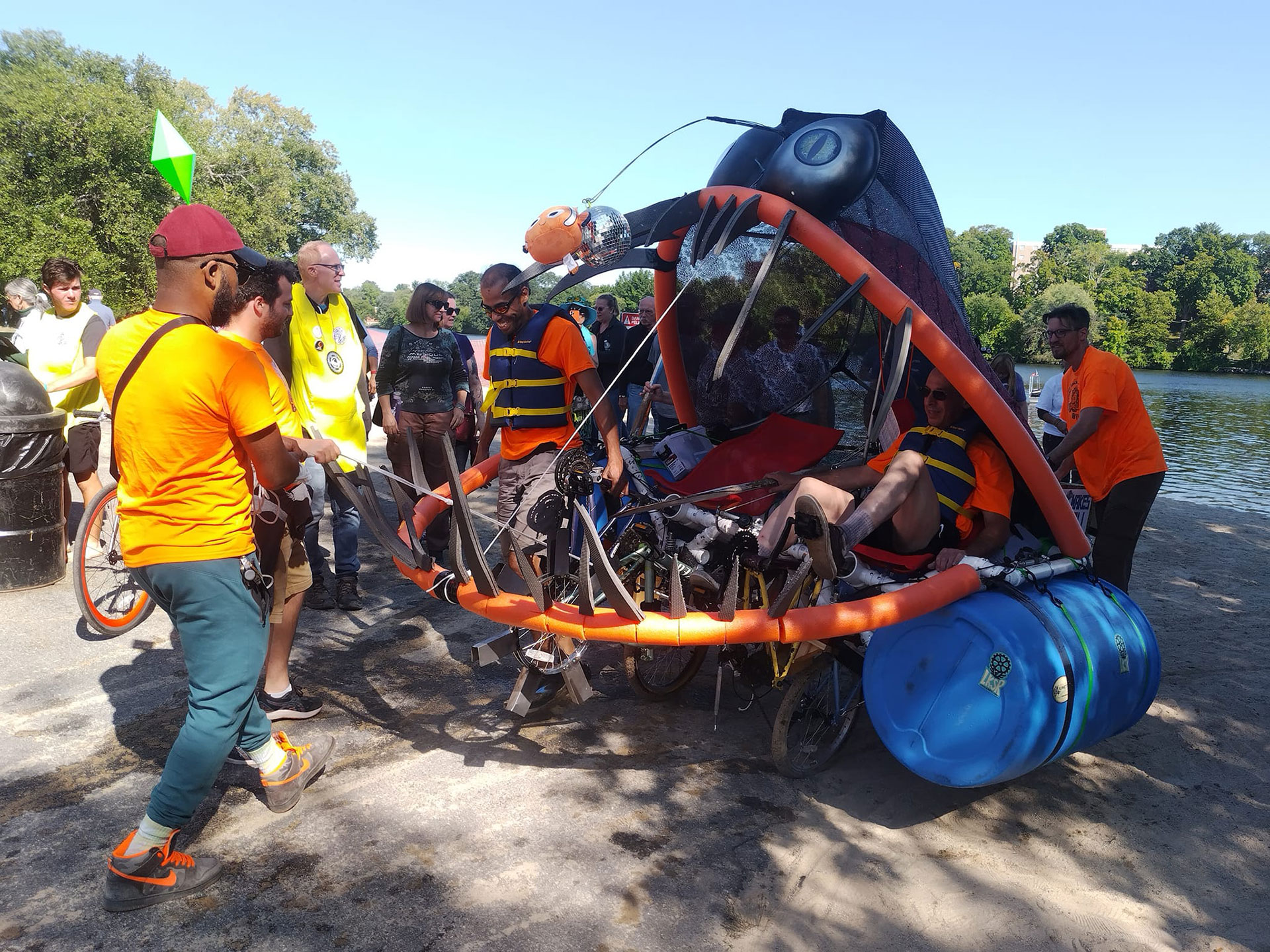 Our wheels got stuck in muck on the way out, too! Our minions came to the rescue once again, grabbing our tow rope and pulling us out like the grandest catch of the day. They dragged Big Fish onto the beach, then crack!

One of the PVC jointssnapped in half, compromising the structure of the sculpture. Things didn’t look good for Big Fish. Then we remembered that we brought hose clamps along with us. We married the two broken halves of PVC and strapped a steel hose clamp around the seam. We were back in business once again! And just in time. The other racers were just heading out as we climbed back aboard. 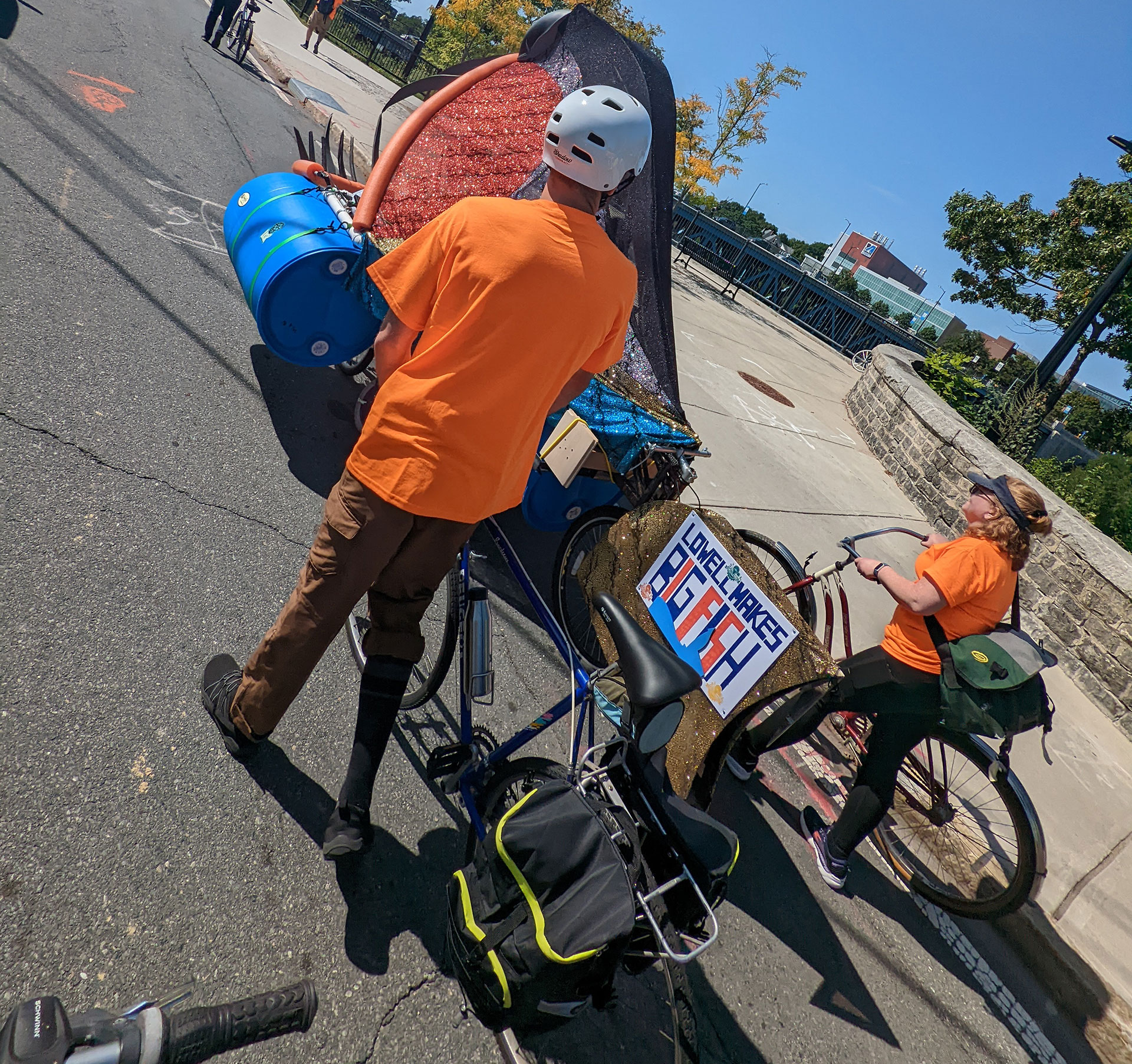 "Race until the end"

We rolled on. Big Fish was harder to move than when we started, but it still moved. We lumbered slowly up the hills. When we reached downtown Lowell again, we had to detour around the race route due to an accident. Then we finally rolled across the finish line in last place. Last place felt good. There were many times where it looked like we wouldn’t finish, but we did. Our perseverance earned us the Mad Marshal’s Award. Glorious! 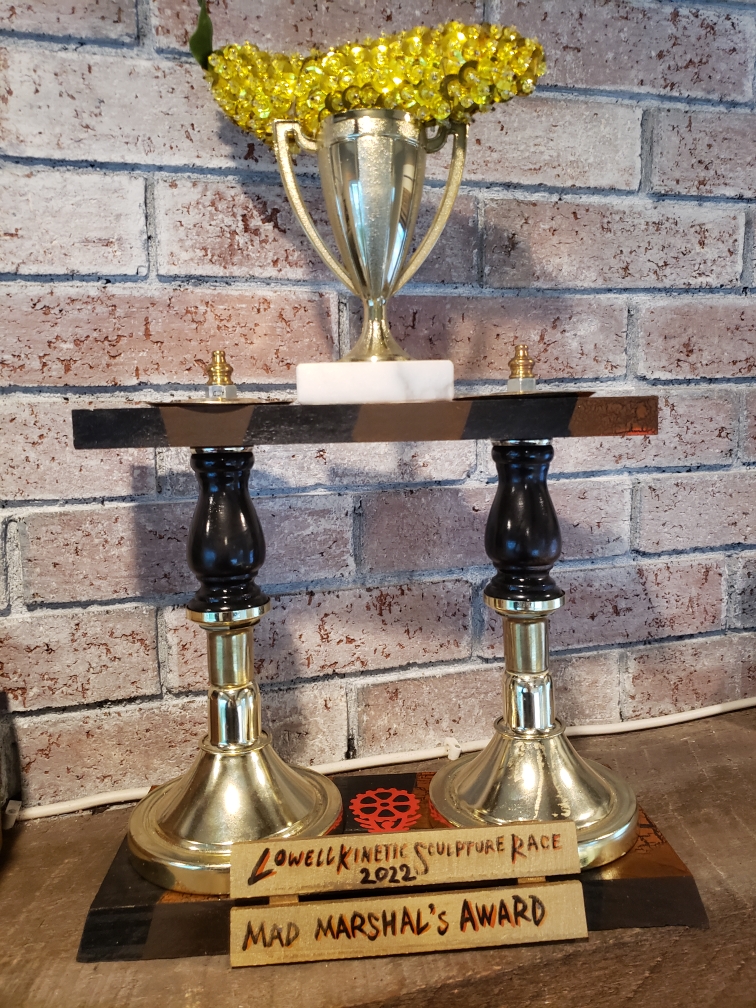